Ride of the Bicycle Bells!

Ride of the Bicycle Bells by Chris Thornborrow for 12 bicycle bells and 1 bike horn! 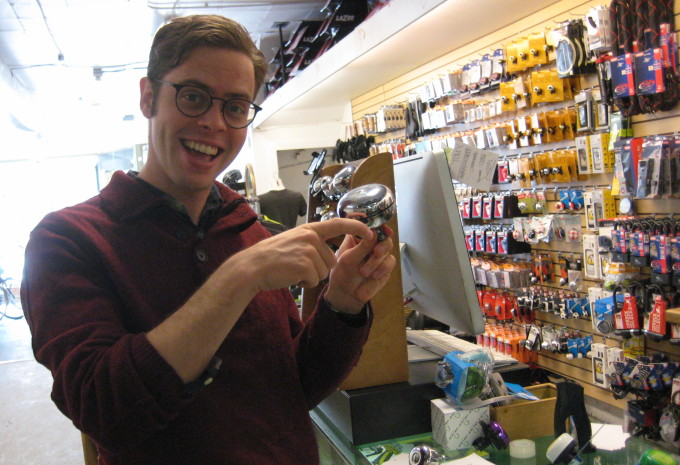 Chris tries out the bells at Curbside.

Chris, what was the biggest challenge around writing for bicycle bells?

I think the hardest thing is negotiating 13 bells and treating it like one instrument. Each bell has its own unique sound. Some just have one ding, some have two. Some have a ring similar to an old telephone. One of them even has a doorbell sound. I think the trickiest thing is keeping track of each of the bell’s unique sounds and taking advantage of those sounds for overall piece.

How on earth did you find all those bells?

Larissa and I walked into a bike shop on Bloor and just started playing the bells and matching their pitches using an iPhone piano. The shop clerk gave us a weird look and asked us what we were up to, and once we explained, he was pretty eager to help us out. Soon we had about 30 bells laid out on a table arranged from highest to lowest, labeled with sticky notes. We then narrowed it down to the thirteen bells I wanted to use.

Pitching the bells with a keyboard app.

How did you go about writing for the bicycle bell?

I wanted to a rhythmic momentum piece. I gave each player two pitches to work with, and then created interlocking rhythmic motifs to build the piece. I found it made the process easier to think of each performer as a percussionist. To complicate matters, some of the bells have two sounds: one where you press the ringer forward, and a second sound when the ringer is released. To take advantage of this feature, I used up-bow and down-bow markings, just as you would for string instruments. 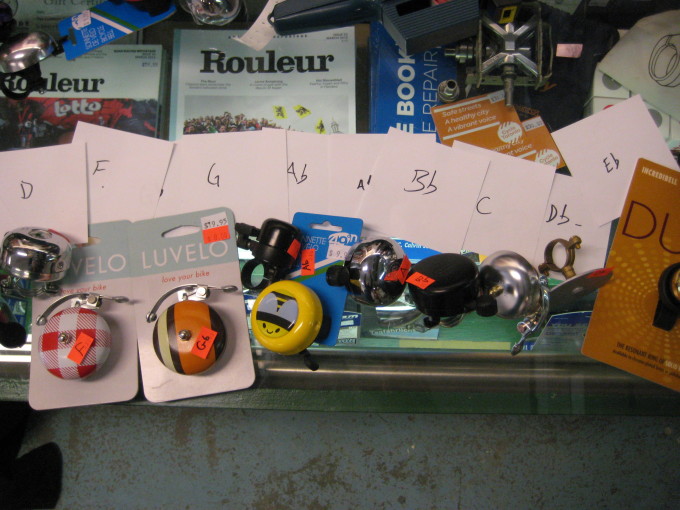 Chris makes a “piano” on the counter of Curbside Cycle.

Who are these crazy demanding opera singers on bikes anyways?

Ride of the Bicycle Bells will be premiered at RCM’s 21 C Festival on May 21st at 10 pm in Mazzoleni Hall at Bicycle Opera’s preview of shadow box.